After Christmas, it made me realise how fast my time was flying in BA, and how little time I had left.  My friend Gil was leaving to head back to Canada on 31st December, and I guess his departure only made my own seem more real and imminent. We put our heads to thinking of the things that we really needed to experience before we left and, of course, came up with a tango show!

(Oh, how I resisted the urge to call this post the Last Tango in BA)

We had both independently been to milongas – community spaces where locals go to dance with each other and occassionally hold shows – but we wanted to experience the full, flashy, professional show. There are several to choose from, ranging in price up to the most expensive – Rojo Tango at the exclusive Faena Hotel at a whopping $400+.  We chose Esquina Carlos Gardel, which had been recommended by some local friends.

We also chose the show only option, deciding to skip the pre-show set menu dinner. I’m sure the food is “good” but we’d both been in BA long enough to know that there are many “better-than-good” eating options around, and also to know how much the cost of the dinner will get you in a “great” restaurant.

We were picked up from Gil’s apartment by a driver, included in the ticket, and taken to the venue, a historic building in Abasto. Upon arrival, we were shown to our seats, along a high counter, elevated behind the dining tables and with a direct, front-on view to stage. Surprisingly, most of the dining tables seemed to be filled with locals, whereas those that arrived for the show only were tourists. We were served wine, also included in the ticket price, and offered the menu for any a la carte snacks we might want to purchase. Before the show started, we were asked to come and have our photo taken with the dancers, where we were instructed into fake poses for the photos which would be offered for sale at some exorbitant price afterwards. Definitely the most touristy “push” of the night and one we laughed about, then tried to put out of our heads in order to enjoy the show.

The show started with the orchestra being unveiled in an elegantly framed box above the stage. We were then treated to number after number of great performances, each time with different dancers in amazing costumes. There was an older couple who danced a couple of numbers – a reminder that tango is ageless; and a guy who danced a tango with two brooms tied together – great technique. There were young, dynamic couples who threw each other around, and showed amazing strength and grace.

Meanwhile, the wine service was generous and frequent! There was a brief intermission where the orchestra kept us entertained, banging out some tango numbers, then the dances continued. Each time that we thought it couldn’t get any better, they surprised us with an even more dramatic and incredible performance. The show finished with a group performance, followed by the whole troupe appearing on stage for their well deserved applause. 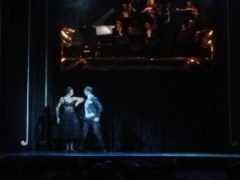 The photos aren´t great, but check out the link for a better idea.

After the show, we were delivered to our respective homes by our friendly driver, both agreeing that it had been a thoroughly enjoyable and entertaining evening, certainly worth the cost.

With Gil gone a few days later, and the new year in full swing, I sat down to review some of the notes I’d made when I first arrived, and some of things I hadn’t yet done. I decided to contact one of the puerta cerradas to see if they were open so soon after the holidays, and if they could fit me in for that night. Paladar was a puerta cerrada that I had read about when I first arrived in BA, run by an Argentinian husband and wife team. Their website certainly indicated they were open, and the week’s menu looked delicious. A quick phone call, and chef Pablo confirmed that there was space available. I was in luck, so I rounded Cheryl up, then Laura, an Italian friend that Cheryl had met in Brazil, and we had a date.

Laura and I shared a cab from Palermo and, just as we climbed into the taxi, the skies opened and the rain started in full force. With no umbrella, we ran to the door, hoping we were in the right place. With a puerta cerrada, it just looks like someone’s apartment or house, and there are no signs to indicate a restaurant. Luckily, we were, and Cheryl was waiting for us at the table. 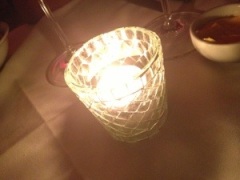 The menu included matched wines, and we were welcomed and served a glass of bubbles by sommelier Ivana. We were in an apartment on the second floor of the building, and a huge window gave us a tree-level view over the rainy street. Our courses started with an appetiser of a perfectly cooked “langostino” (or prawn to us) on a creamy aioli, followed by an entrée of a brie and tomato tart. Each were matched with wines that were well-explained by Ivana, tonight favouring the higher altitude region of Salta.

Our main course was lamb served with a quinoa salad and tzatziki. A Greek influenced dish that transported us back to the streets of Melbourne and was a hit with the Aussie girls! 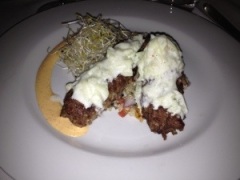 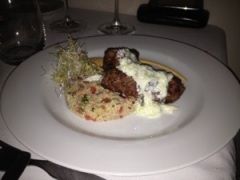 We had a delicious pre-dessert, a light and fresh lime and basil sorbet, followed by the real deal, a heavier and richer dulce de leche creme brulee. 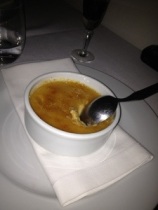 We finished the meal with a nice coffee, and Pablo brought the couple’s baby daughter out from the kitchen to see us. He told us that they had recently been able to buy a house, so no longer live in the apartment, using it exclusively now for the restaurant. I had the feeling that we’d experienced an authentic puerta cerrada, set in what had been their home, and run by an Argentinian couple who’d put their hearts into it. The food and wine were incredible, the girly company great, and it was a nice way to spend one of my last nights in BA.

3 thoughts on “Dancing and Dinner”