After Christmas, I made plans to catch up with Roxana for some one-on-one time and we decided on lunch in the restaurant at the Evita Museum in the neighbourhood where Roxana lives. We chose a table inside, away from the direct sun in the courtyard, and enjoyed a light lunch and a chat. The museum and restaurant are set in a beautiful big building that used to be a home for single mothers, and it’s a lovely setting. I had visited the museum when I was here last time, so didn’t feel the need to revisit. After lunch, Roxana offered to show me around the area, a small and pretty slice of Palerm, often referred to as Palermo Chico, nestled amongst the Zoo and all the large parks.

We took a walk around the area, with its leafy streets and pretty buildings, then headed into the Japanese gardens, a small and tranquil oasis where you can forget that you’re right next to one of BA’s busiest roads. 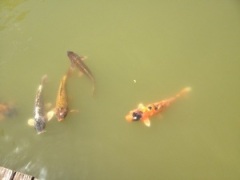 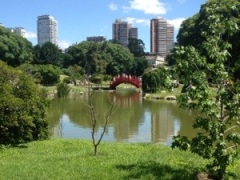 As we were walking back, we past Astrid y Gaston, the BA version of the famous World’s Top 50 restaurant in Lima. We noticed that they had a very reasonably priced “menu ejecutivo” and decided we would come back to try it for lunch another day. 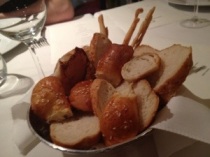 We had no trouble convincing Gil to join us, and made a booking for that coming Friday. The menu consisted of an entree, main and dessert with a generous glass of wine and coffee, all for AR80, or A$16. The food was nice, but not amazing. The bread basket was great, which is always a welcome change in BA!

Roxana’s fish entrée certainly looked like a winner and got the thumbs up from her over the AyG version of nuggets and salads that Gil and I chose. Roxana and I had a Peruvian style fried rice, while Gil ordered a steak with salad. We felt the better choice of mains would have been the famous ceviche that neither of the fish-eaters ordered. Dessert was a kind of runny dulce de leche with a bit of uncooked meringue, which I didn’t enjoy and wished I’d gone with the icecream option.

This neighbourhood is also home to one of the most recommended icecream parlours, Jauja, which specialises in exotic flavours made with Patagonian fruits, and prides itself on its chocolate flavours. Unfortunately, we were too full to try on this occasion. I’ve since been told they have a store in Carlton, Melbourne, specialising in Australian flavours. 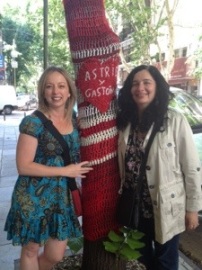 That evening, I had arranged to meet Cheryl for a drink as she was meeting a friend of hers who was in town from Melbourne. The venue was Bangalore, an Indian influenced pub, and Roxana was there when I arrived. As we were catching up, I realised that the girl sitting in front of us looked very familiar to me. When Roxana asked where she was from, she answered that she was from Melbourne then turned to me and asked “do you do Pilates?”. She is from my Pilates class in Elsternwick and was there the night in September when I came in from work, all excited, with news of my resignation and my plans to spend summer in south America. Small world! We were still just catching up on the coincidences when Cheryl arrived and went straight towards her to greet her. It was Cheryl’s friend and ex-work colleague, Veronica! Talk about six degrees of separation!

We were soon met by Veronica’s cousin, and enjoyed a few drinks, Cheryl and I sharing a jug of Indian Colonies influenced Gin and Tonic with refreshing cucumber. By this stage, a few were hungry and ever-resourceful Roxana came up with a very typical local restaurant nearby, El Trapiche.

The place is huge, having grown over the years from its original corner location, gradually acquiring neighbouring buildings to become the large warren of a place it is today. There were a number of tables empty when we arrived, but it early by local standards and the place was heaving before long, full of local families and groups of friends. The menu is equally as huge, with every variation of Argentinian specialty you can imagine, heavily focused on beef, but with a large selection of milanesas, pastas, seafood, and other goodies. Cheryl and I shared some brochettes, beef skewers with grilled vegetables, which were massive and very good. Roxana chose a nice serve of steak, which came out with two portions, and the cousins ordered beef “criollo” style. It came served in a massive pan, surrounded by potatoes and smothered in a sauce made from tomatoes, onions and capsicum, finished with cracked eggs on top. 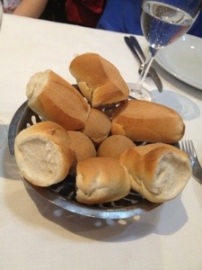 There was the usual average (bad) BA bread basket, delicious chimmichurri and salsa, and we shared a lovely bottle of Luigi Bosca Malbec. It was a great night, and an authentic experience in an old-school Argentine restaurant. I left the girls and we went off in our different directions home.

I was almost at my door when I got a call from Gi and Andy. They were heading out and would drive by and pick me up. Why not? It had been a great day so far, why end it now? I had time to quickly change before they were at my door. We first met up with a group of their friends from their school days and had a drink in an outdoor bar. We were approached several times by promotional girls offering us armbands for free entry and welcome drinks at several different night clubs. This apparently only happens to girls, and is usually only for the bars that are not considered worth going to.

Once all the friends were gathered, we headed back to Rose Bar, the night club they had taken me to once before. Drinks are expensive, but very strong in the clubs, so not many were needed, and we chatted while we could hear ourselves, and danced a lot. Eventually, at 5ish, I thought it was a respectable time for me to take my leave, and the girls agreed and accompanied me home. It was a nice way to catch up with the girls again before I left, and a great impromptu night out. 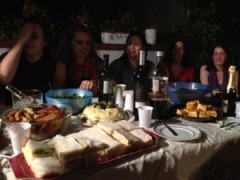 A few nights later, it was New Year’s Eve. I had heard all sorts of nightmares about getting around on NYE and not being able to get transport, so I accepted an invitation from Roxana for a house party in Palermo, close enough to home to walk back if I needed to. The party started with a pot luck dinner – bring a plate – so I whipped up an egg and ham slice, put together a small cheese platter and, of course, took along a couple of bottles of wine. I managed to get a colectivo part of the way, which was handy with all the stuff I was carting, and walked the rest of the way. I was met by our host, Claudio, at the door, and soon found Roxana and Maru. We got dinner organised and crowded onto Claudio’s verandah for an eclectic feast. There was vitel tone like at Christmas, caprese salads, sushi, tarta de atun and batata (tuna and a kind of white sweet potato) and, of course, egg and ham slice.

We had to fight the wind to hold on to our plastic plates but it was pleasant sitting outside. As midnight approached, we cracked open the champagne and filled everyone’s glasses. There was the count down, the pop of local fireworks, some very close to the building, and saluds and besos all round.

More people arrived after midnight, having spent the dinner with family or other friends, and the party fired up with dancing, and plenty more champagne and other beverages. The night past quickly, catching up with Rox and Maru, and chatting to new people. At one stage, I thought about making the move to go home, then realised how late it was and thought that I may as well wait until it was light in case I had to walk home. Sure enough, the sun was soon poking its head over the horizon, and a group of us who lived in the same part of Palermo walked home together. A fun and interesting night!

After a big sleep in, and being house-bound most of the next day, I put the call out to Roxana, Maru and Cheryl to see if they wanted to catch up at Gran Bar Danzon, the only bar in the city with a selection of wines by the glass, and one of the few opened on this quiet start to the year. We were joined by Laura, an Italian friend Cheryl had met while travelling in Brazil. We ate some of their excellent little plates, lamb and springrolls, and Cheryl and I tried a few different glasses of wine. It was lovely, and looks like a nice place for dinner also. 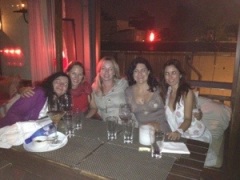 Before I knew it, it was my last night in BA. Roxana, Maru, Virginia, Cheryl and I all met for dinner on the second floor deck at Quimbombo, overlooking a plaza in Palermo Soho. There were drums beating in the plaza and it was a beautiful evening to be sitting outside. We enjoyed a lovely meal and, Cheryl and I, lots of wine, and good conversation, talking about the places where we might meet up next (Brazil, Cambodia, etc) and whether or not I would return to BA. We were joined on the terrace by an unwelcome visitor, a cockroach, that put Roxana off but seemed par for the course of outdoor dining in such a climate for the Aussie girls. After dinner, we walked to Sheldon for a final cocktail on their beautiful rooftop before calling it a night.