On my third day in Mendoza, I had the luxury of being in someone else’s hands for the day and all I had to do was be ready for my hotel pick up at 8.45. My guide, Gilda, was there right on time with the waiting bus. As predicted, they had managed to fill the tour they’d released just two days before, and there were another four Aussies on board and a German couple who now live and teach in Lima.

Our first stop was the architecturally amazing Catena Zapata, another fine example of what to do when you have more money than you, well, know what to do with. (For some reason, MONA came to mind.) Inspired by the Guatemalan ruins of Tikal, the fourth generation of the Catena family had the winery built in the form of a huge pyramid, using materials from the local region. The result is impressive, and the view from the top of the pyramid towards the snow-capped Andes makes it even more so. (I can´t believe I don’t have a photo of the outside, but check out the web page.) 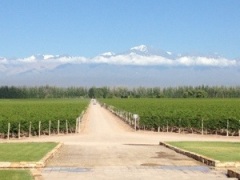 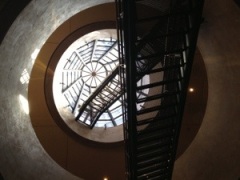 Thankfully, because 9.30 in the morning is a little early for wine tasting, even for me, we started with a tour of the impressive facilities. The architecture inside is just as amazing, from the staircases, to the barrel room and the bottle ageing cellars. We made our way to the rooftop where we could admire the beautiful view, and were then led back to the tasting area (because 10.15 is SO much better for tasting!) where we tasted three different wines. We started with the 2008 D V Catena Chardonnay, which was a little on the oaky side for my taste, followed by the 2008 Catena Alta Cabernet Sauvignon and finishing with a 2008 Angelica Zapata Malbec, both of which were nice. 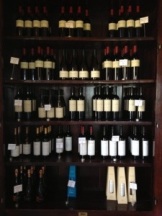 Catena Zapata is a large producer, with many different labels representing different levels of wine, and many are only available on the export market. My enterprising fellow Australians used the extra time available after our tasting to upgrade and taste some of the next level wines, such as the DV Catena Malbec, which they said was well worth it.

Our next stop was just down the road at Viña Cobos, a winery owned by Paul Hobbs, a famous wine maker and consultant who played an integral role in taking Argentinian wines from quantity to quality. In contrast to Catena Zapata, the winery is understated architecture, but the large concrete block building is still striking in this landscape. Other than a few plots of vines around the area, some of which belong to the family of Paul Hobbs’ argentinian business partners, the majority of grapes are purchased from other growers both here and in the higher altitude of the Uco Valley. 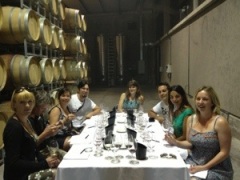 We had a short tour of the facilities before being led into the cool barrel room for our tasting, this time accompanied by some local cheese and nuts. We tried a 2012 Felino Chardonnay, with just 10% of grapes aged in oak, resulting in a fresh wine, rounded out with the light oak, that I really enjoyed. Next up, we tried three different Malbecs, each using grapes from different vineyards and with different oak treatment. Of course, my favourite was the more expensive 2010 Bramare Malbec from Rebon Vineyard at $AR295, but at A$60, it would be a nice one to lie down for a special occasion if I was going to be anywhere near my wine rack anytime soon. The 2010 Bramare Malbec from the local Lujan de Cuyo was big in the mouth and also delicious. 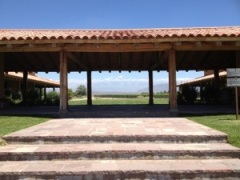 Next up was our lunch stop at Finca Decero, which was a large ranch style building in a beautiful setting that instantly made me want to live there. We enjoyed our wines with a delicious three course meal, starting with a fresh and light gazpacho with goats cheese. Yum! We then enjoyed a nice steak (still in Argentina after all!), followed by an upside-down baked tart of seasonal fruit with lemon cream that was delicious! The wines were a Malbec, a Cabernet Sauvignon and a Syrah. Maybe it’s the Aussie in me, or the welcome break from all the Malbec, but although all the wines were good, I favoured the Syrah. 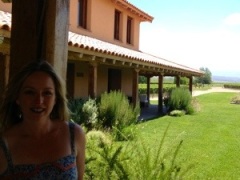 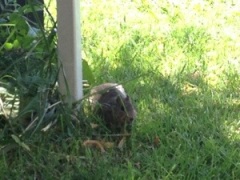 After lunch, it would have been nice to string a hammock under the shaded verandah and take a siesta, but duty called, and we were off to our last stop, Alta Vista. When we arrived, our tour guide was not quite ready for us, and we enjoyed a little time resting in the shade and watching wild guinea pigs run around the yard! The heat had reached an all time peak for the day and I was glad when our tour led us into the adobe-style winemaking area and the coolness of the barrel rooms. We were then taken back upstairs to the tasting room where we tried four different wines. By this time, I had stopped taking notes, but there was nothing remarkable that jumped out at me and my fellow tasters tended to agree. The staff were really friendly and helpful though and, together with our tour guide, put together a short list of some of their favourite Mendoza wines.

The bus trip back into Mendoza was fairly quiet, with many taking the opportunity for a little nap. It was a great day out with fun people and our friendly and informative guide. It was nice to have one day where I didn’t have to think too much, just get on and off the bus at the designated times, but I was also looking forward to my adventure to the Uco Valley the next day.