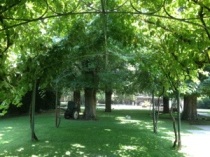 So, into a new week and I thought I’d explore a new winery, and headed to Cousiño-Macul, one of the easiest wineries to access from Santiago as it is still within the metropolitan area.  You can get most of the way there on the metro, and then it’s just a short 3,000 peso ($6) cab fare to the main door. In fact, it took me much less time to get there than I’d imagined and I arrived an hour early for my tour. Unlike many wineries that have cafés, restaurants or tasting rooms, there wasn’t much to do before the tour rather than enjoy the shade of a nice tree as there are none of these additional facilities. The winery is often used for events, with the exception of weddings which are reserved for the family only, and there was an event in full swing. It is the oldest family-owned winery in Chile, but many hectares of vines have been ripped up for property development given the metropolitan location. 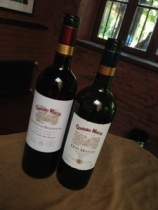 The tour was interesting for the history of the place, having been established in 1856 and still containing many items of the old equipment including some barrels that have been heritage listed.  We stopped in an ancient cellar to try a “grey” wine, a wine made with minimal contact with the skins (only 10 minutes from memory) to produce a wine somewhere between a white and a rosé. Not to my taste, but the lovers of Californian White Zinfandel seemed to like it. When we returned to the tasting room at the end of the tour, we tried two more wines, one of which I liked a lot, the Antiguas Reservas Cabernet Sauvignon, which I decided to take home with me. Good wine in Chile is still very cheap by Australian standards, or perhaps “economical” is a better word since “cheap” makes it sound “nasty”. This 2010 Cab Sav is not the top of their range, but above mid-range, and cost about $14. I really wish there was a practical and affordable way to get some of this wine home! 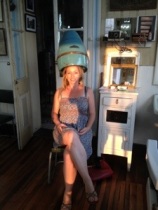 The following day, I had plans to catch up with Dorothee, and we met at a restaurant we had both heard a lot about, Boulevard Lavaud, or the Peluqueria Frances. The restaurant is located in a HUGE building in bohemian Barrio Yungay, with an original and still operating hairdresser on the corner. The restaurant which surrounds the hairdresser is two-storied and filled with interesting original furniture and pieces from a range of eras. When led to the ladies room, I thought I was stepping into a wardrobe, only to find a tiny hidden passageway leading to the bathroom. 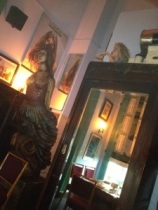 The place was full when we got there, and we had to wait with a glass of champagne to be seated. We also had time to look inside the original hairdresser, and even meet one of the still-working hairdressers who took great delight in having us take up different poses. We were seated about half an hour later and enjoyed our meals, but enjoyed even more marvelling at the quirky features of the place. The paper placemats are designed to be “stolen” and contain a walking tour of the historic area. 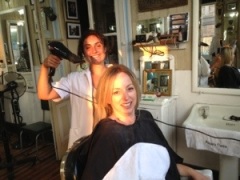 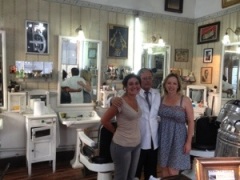 The following day, I decided to both use my walking map, and take Dorothee’s advice, and visit the Museo de la Memoria, which is in the same area. I started late after a morning run, and walked through Barrio Brasil, stopping to have lunch. It was time to bite the bullet and try one of the local specialties, Pastel de Choclo, directly translated to corn cake, but more like a shepherd’s pie with corn mash instead of potato and, in this case, chicken and pork in smaller quantities than we would expect lamb. It was OK, edible, but the corn mash is very sweet, the consistency a little gluggy, and the meat very scarce. At least I can say I’ve tried it, but won’t rush back for more. 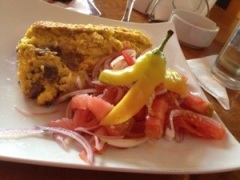 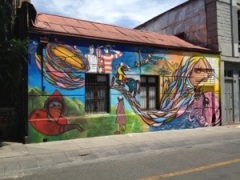 After lunch, I wandered from Barrio Brasil through Barrio Yungay, again admiring the street art and architecture, to the far end of the barrio where I found the Museo de la Memoria, or the Memorial Museum.

No photos are allowed in the museum, entry is free, and there is a very comprehensive audio tour available for about $2. The museum is riveting. It covers the time from 1973 when the government was overthrown by the military coup, Salvador Allende committed suicide, and Pinochet took power. It goes on to show how life was, with many new rules imposed, curfews enforced, people taken away, often killed, many exiled, and others still unaccounted for. The final stages cover the time when the dictatorship was overcome in 1990. It includes very personal accounts from people who lived though those times, and stories of those that didn’t survive, with a heart wrenching photo wall of the victims. It is not an uplifting experience by any stretch of the imagination, but an eye-opening and informative one. It’s difficult to believe that this all took place within my lifetime, and that many of the people that I’ve met here have lived those times.

After the museum, I wandered across the road and into the very pretty park, Quinta Normal. The park contains a number of museums and interesting buildings and, in the middle, there’s a lake with paddle boats and lots of families were out enjoying the sunshine and eating icecreams. It was a pleasant reprieve to sit on a park bench and watch all the activity after the gravity of the museum. 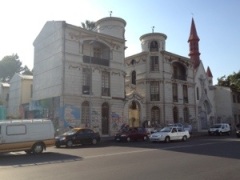 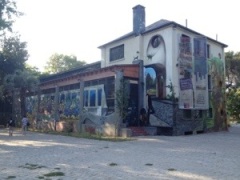 One thought on “Santiago – nostalgia and history”