My second day in Santa Cruz started with a very reasonable complementary breakfast of bread, avocado, ham and cheese, coffee and a “tang-like” juice. Plus a few other Chilean staples that I passed on, like sweet cake, a very sweet jam and a cream cheese spread. Rather than the more expensive taxi option, I decided to be a little more adventurous and try the local forms of transport to arrive at the wineries I had planned for the day. I knew that Montes, my first stop and producer of a very nice Malbec I’d tried in Santiago, was close to a main road, and I would worry about how to get from there to my second stop, Lapostolle, when the time came. I made my way into town where I found a “colectivo” stop. Unlike in large cities, where the local buses are called “colectivos”, in many less busy areas of Chile, including areas of Santiago, marked cars operate as colectivos. Unlike taxis, colectivos follow a set route, making minor deviations at times for the convenience of their passengers, and take up to four or five unrelated locals at a time at a set price, waiting until the car is full before departing. It’s a great concept, particularly in a rural area like the Colchagua Valley where many people can’t afford cars and distances between towns can be vast.

I found my colectivo to Apalta with one person already waiting, and another arrived shortly after. Because the driver knew I had a reservation at the winery, he offered to leave immediately if I would pay the additional seat, doubling my fare from CLP700 to CLP 1400, a grand total of $3, which I thought was a fair deal. After dropping the two ladies off at their respective houses, the driver dropped me at the main entrance of the winery. I still had about 200 metres to walk to reach the winery, but the trip was already a lot cheaper than the previous day’s cab fare.

I was running a little late but, thankfully, the tour had waited for me when the guard at the gate had told them I was on my way. There were only two Brazilians on my tour, so it was a small and intimate group. We began with a tractor-pulled carriage ride up to the top of the property, passing the in-house llamas, and arriving at a magnificent viewpoint overlooking the vineyard and the valley beyond. The morning was overcast and surprisingly cool, but we were assured that it would fine up later in the day.

The tractor returned us to the main building, where we continued the tour of the gravity-based wine making facilities, the feng shui inspired premises, and culminated in the barrel room of the gran reserva wines, where Gregorian chants were peacefully being played to the resting wines, a technique implemented by the head winemaker. 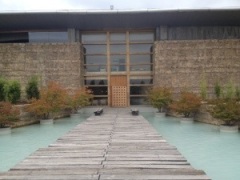 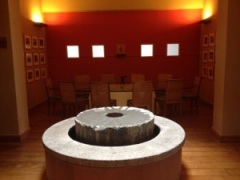 Our tasting room overlooked the barrel room and we were treated to four wines from the large Montes selection, starting with a 2012 Sauvignon Blanc with a pineapple aroma and a citric, acidity flavour. We followed that with a 2010 Outerlimits Pinot Noir, the range thus named for the unique terroir in which they’re grown, in what is considered by the winemaker to be the “outerlimits” of where wine is usually grown. This wine exhibited notes of smoke with raspberry and strawberry flavours.

The third wine was my favourite, a 2010 Montes Alpha Cabernet Savignon with 10% Merlot, a very smooth wine full of black fruits and pepper. This was followed by another Montes Alpha, this time the 2010 Syrah, with light tannins and a smooth berry flavour.

That brought the tour to an end, and also brought the solution to my transport concerns since my Brazilian companions had a driver and were headed to the same winery.

Arriving at Lapostolle is impressive, with the unique winery looming majestically over the vineyards.

I was temporarily separated from my new Brazilian friends, who were shuttled off on the Spanish tour, while my first task was to finalise the menu for my post-tour lunch before I joined two New Yorkers for the English tour.

Every element of this winery, owned by the French family behind Grand Marnier, is impressive. We started the tour on the roof, which is one level above the entrance and provides an amazing view over the valley, and our guide explained to us that the winery has been built in orientation with the Southern Cross. He then led us inside to a central staircase that unites all levels of the winery, blasted five levels into granite rock. The spiral staircase represents gravity, the premise on which the whole construction is based, with its clockwise spiral reflecting how water naturally flows in the southern hemisphere. The granite removed during blasting has been used to make the floors, and the exposed granite provides an appropriate wall for the wine library. The tour flows in the same downward spiral, from the initial french oak vats that receive the wine, to the barrel rooms below, and finally, ending in the cellar for the tasting. 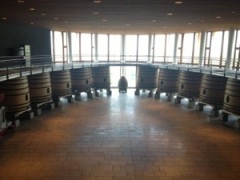 We first tasted a 2012 Casa Sauvignon Blanc, with 8% Semillon and 2% Sauvignon Gris, producing a low acid wine with lemon and grassy notes. The second wine was made from 100% certified organic grapes, a 2011 Merlot with 15% Shiraz. It has had 14 months in oak, resulting in a nice bodied wine with a herbaceous and spicy nose. The last wine is the wine of the day, the only wine grown on site. the single vineyard 2010 Clos Apalta, a blend of 71% Carmenere, 18% Cabernet Savignon and 11% Merlot. Every care and luxury is afforded in the making of this wine, from the oak vats, to hand maceration, and 24 months in new french oak barrels. The result is an almost black wine with a delightfully peppery tongue and delicious flavours of blackberries, chocolate, licorice and tobacco. I could keep drinking this wine but, at CLP100,000 (>$200) per bottle, I’ll have to refrain and just enjoy the experience of having tasted it.

When the tour is over, I’m reunited with the Brazilians who, during the course of their tour, have decided to change their plans for lunch and also eat at Lapostolle. That also solves any concern about how to get to the remotely located restaurant which, whilst still on the property, is some distance from the actual winery. When we arrive at the restaurant, there are only two other people seated on the terrace, two other Brazilians from the other tour group, so we decide to all sit together.

I had chosen the Cuvee Alexander Menu which, with the exception of the appetiser, pairs each course with wines from the Cuvee Alexander range. The appetiser plate of three mini tastes was paired with the Casa Sauvignon Blanc that we tried in the tasting. The entrée of spiced shrimp (prawns to us) was served with a kind of risotto made from local grain, mote, and avocado, and paired with a creamy 2011 Chardonnay. Serves of the wine were generous, and bottles were left on the table to provide for discreet top-ups between courses.

The main was steak with carmenere sauce and a potato millefuelle, paired with a delicious 2011 Carmenere. The final course was an Orange “suspiro”, a Peruvean-inspired dessert, this time paired with a glass of Grand Marnier Louis Alexander, given the wineries ownership. I was guilty of talking and listening too much, and enjoying the food and wine far too much, to take more photos!

It was a lovely afternoon, with conversation flowing in Portuguese, English and a little Spanish to fill in the gaps, and lots of laughter. Any transport concerns were completely abolished when the other Brazilians offered to drop me back into town after lunch. Even better, during the drive, I was invited to go and hang out by their hotel pool with them for the afternoon, a perfect way to “work” off the food and the wine. After a very relaxing few hours by the pool, I made my way back to the hostal where no dinner was required and an early night was in order. The next morning, my only plans were to sleep in, enjoy the complementary breakfast, and take my time getting the bus back to Santiago, which all went very smoothly. A great trip, some nice new people, and some fabulous food and wine. Now that I’ve decided to stay a little longer in Chile, I can see another trip to Colchagua slipping on to the agenda. 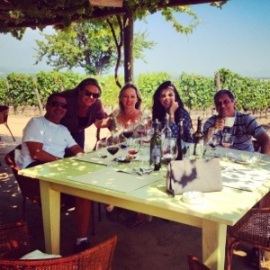 One thought on “Valle de Colchagua – Montes and Lapostolle”