I won’t lie to you, one of the reasons I chose to stay longer in Santiago versus going back to Buenos Aires, is the wine, especially when harvest was fast approaching. BA has great food, but it is a long way from Argentina’s major wine regions, and also a little short on wine experiences. On the other hand, you really can’t drive an hour in any direction out of Santiago without hitting a wine region. Well, maybe if you drive due east but, eventually, you’ll hit the Andes and, if you keep going, you might just happen upon Mendoza, Argentina’s largest and most famous wine region.

So, I waited with anticipation as “vendimia”, or vintage, approached, researching and diarising the corresponding festivals that each region would hold.

The first on the calendar, and one of the largest and best known, was in Santa Cruz, in the heart of Colchagua Valley on the famous wine trail, and a bit over two hours south of Santiago.

I’d initially thought about going on the bus and staying overnight as I did when I visited Colchagua previously but, since the festival attracts people from all over the surrounding area, accommodation was booked up quickly. A day trip on the bus was possible, but would make for a very long day out. Luckily, a good friend, Camilo offered to accompany me and be the designated driver, and we invited a couple more friends, Fer and Gerla, to come along on the road trip.

The drive took a little over two hours and, once we turned off the main highway, the traffic heading into Santa Cruz was noticeably heavier. We managed to find parking a few blocks from the main plaza, and set off to find the action. The main plaza was set up with many tents housing the attending wineries, and a main stage for entertainment. We bought our souvenir glass and “tickets” for wine tasting, at CLP 4,000 (about $8) for 4 tastings and the glass, and CLP 2,500 for a card of four extra tasting tickets. Fer and I planned ahead and bought the extra tickets upfront!

Having arrived around 2.30pm, we were all hungry and set off in search of food before the drinking started. One of the main streets leading off the plaza was closed off to traffic and set up with various artisan stalls selling their wares. At the end of the street, was another large stage area with folk dancing and, to the right, another whole street closed off, covered in a marquee, and filled with a variety of wonderful food. We were like kids in a candy store, buying large skewers of deliciously barbecued lamb, pork and chicken, empanadas and fresh juices. 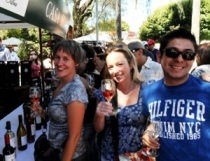 Once we had eaten our fill, it was time to hit the wine stalls. We started slowly and gently, with a refreshing and dry rosé from Casa Silva made from Cabernet Sauvignon, perfect for the warm day. I wished we’d taken more advantage of this winery early on as it was impossible to get near it later in the day, the line stretching out to the street!

With our first wine in hand, we explored the set up, stopping to watch some of entertainment on stage which, at that time, was children dancing traditional folk dances in a competition. Very cute, particular in the traditional garb. We were hoping to see some of the candidates for the Harvest Queen, who was to be crowned that night, but they alluded us.

After a few more tastes, and with the heat of the day building, we found a little spot on the grass in the shade and relaxed, enjoying the music and the atmosphere, with everyone around us well behaved yet enjoying the fun. After a while, Fer and I went off to top up our glasses and check the proceedings on the stage. While we were watching the entertainment, a friendly local must have thought we looked thirsty, as he kindly gave us his remaining tickets since he was leaving for the day and wouldn’t use them anyway. That would mean we’d have to try a few more wines before the end of the day. A tough job, but one we were up for! 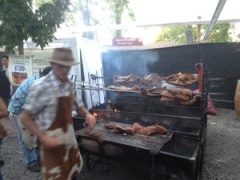 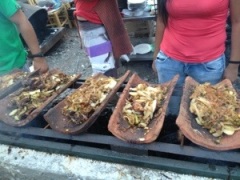 It seemed like it was a reasonable time to eat again, so we headed back to the food stalls.  We realised there was a whole other row of food stalls, with whole animals roasted on the spit, dishes served on roof tiles, and many more options.  We ate some beautifully barbecued lamb ribs, and choripan, though I was most disappointed that they’d run out of “pebre”, a delicious, fresh tomato sauce that is often served with any kind of asado (BBQ).

We then checked out the second stage, where some of the “challenges” set for the Queen candidates were in progress, first some dancing and then, of course, the crushing of the grapes, a challenge that looked far more difficult and less fun than you may think. Although we were barracking hard for our favourite, and she had the help and support of her dance partner, she unfortunately lost the challenge and looked extremely disheartened. 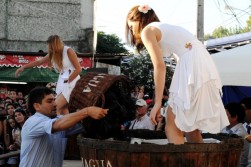 We headed back to, of course, try some more wine. Some of the favourites of the day were Santa Rita, who were one of the few wineries to have a “reserva” and a “special edition” wine available for tasting, Viu Manent and Cono Sur.

We had planned to stay until the crowning of the Queen, which was scheduled for 9pm, before heading back to Santiago but, as we were sitting near the main stage, an announcement was made to say the votes were still being counted and the crowning would be delayed. We decided not to wait, but still stayed a little longer, enjoying the entertainment and the beautiful night, before jumping back in the car and, after a small car park gridlock, making our way back to Santiago. With “Queen” cranking out of Gerla’s ipod, the trip seemed to go quickly and Fer somehow even managed to fall asleep. In the hands of our capable pilot, we arrived around midnight after a fun-filled and enjoyable day.

The following week’s festivities were in Buin, a town only 35 kms out of Santiago and easily accessible by bus. A group of 7 of us gathered at a local coffee shop, then made our way on the metro to Estacion Central to find our bus at San Borja bus terminal. We located the small bus marked “Buin” and paid our fare of a whole CLP 1,300. Once the bus was full, we took off down the highway, arriving in Buin in less than an hour and being dropped off directly opposite all the action.

The Buin festival is a fair bit smaller than Santa Cruz, and the layout was somewhat simpler. Everything was laid out along one big straight stretch, with a stage and chairs set up at one end of the main street, and all the food stalls at the other end, with artisan stalls and, of course, the wine marquee, in between. There were less people than Santa Cruz, and we quickly ran into another group of friends who had come down on an earlier bus.

With our first wine in hand, this time a delicious Tannat-Malbec sparkling rose from a Mendoza-based winery, Familia Perulan, we went in search of food, checking out some of the artisan stalls along the way. To be fair, we didn’t spend much time looking at the stalls in Santa Cruz but, in Buin, with the smaller crowd and more simple layout, it was a lot easier to do so and the offerings of tea, cheeses, local honey, clothes, chocolate, etc were quite good. There was also a large offering of different food, from the standard empanadas and barbecue, to specialities like pastel de choclo (corn pie) and arrollada, a selection of pork rolled in pig skin.

Once fed, we sampled a few more wines, including an unwooded chardonnay from Doña Javiera that I had previously had in Santiago and loved.  I ended up buying a bottle, then tasting their Cabernet Sauvignon reserva, and buying that too!  The range of wineries represented was fantasic, from the big, like Concha y Toro, to the very small, like a guy who buys used barrels and leaves his wine in the barrel for a very long time, producing a wine that he says is more like the old-style Chilean wines (before the introduction of quality wine making techniques?).  The wine appealed to some and his outgoing personality and generous pours appealed ever more!

We managed to find a patch of grass to sit on outside one of the artists’ stalls. It was a profitable arrangement for him because three of our group bought a painting from him! 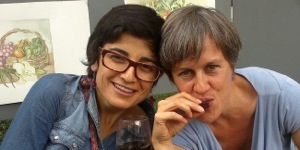 Once we’d run out of tasting tickets, we pooled some money and bought a bottle of Malbec from the same Familia Perulan winery and shared it around the group. We were not far from the stage and could hear the music and entertainment. This was the highlight of the day, enjoying the atmosphere and the wine with a relaxed group of friends from all over the world – Chile, Portugal, The Netherlands, USA, Mexico, Colombia, and of course, Australia. Soon, they were calling for participants in the grape stomping competition and, before we knew it, two of our Chilean friends were on the stage, feet in barrels, competing against each other. Carla and her partner were pipped at the post by Angelica and her partner, who filled their jug first and took wine pressing glory! Complete with red wine splattered clothes of course.

We spent the rest of the day talking and drinking more wine and, at some stage, thinking more food was a good idea.  We selected some bottles to take home with us and, finally, had a final dance with a few old locals before catching the bus back to Santiago.

We arrived just in time to get the last metro train from Central Station. The fun could, and probably should, have finished then and there but, for some reason we thought it was a good idea to drink more wine, especially when Daniel offered to open a bottle of Perez Cruz, widely recognized as one of Chile’s best wines. The last remaining five of us retired to Daniel’s apartment where, despite the small living area, we managed to dance salsa and drink wine for a number of hours! I pity the poor neighbours below but, it was a fun end to a great day out, even if it meant a day of recovery the next day!

There’s more vendimia festivals to come, with plans to visit nearby Isla de Maipo this weekend for more harvest fun.

2 thoughts on “V for Vendimia”