Having a friend in town from Australia was a great opportunity to get out of Santiago for a few days and explore further afield, somewhere that I hadn’t been last time I was in South America. We looked at various options, but the tickets were too expensive and our available time was too short for Easter Island and, being the middle of July, when faced with the choice between South (brrrhh) and North, we decided to head north to the desert. Not just any desert mind you, but the driest desert in the world.

I was looking forward to a few days away from the chill of Santiago and the winter smog which, with the help of the misty atmosphere, clung to the city even tighter and thicker than usual. We left on a Friday morning, and were in Calama by lunchtime, waiting for our pre-booked transfer to San Pedro. Unfortunately, it wasn’t anywhere to be seen and, after the helpful girl at the Information Desk made a few phone calls, a driver arrived with a sign stating “Katie Cheff”. Near enough is good enough I suppose!

It was definitely warmer, and required a few layers to be discarded quickly. The long drive was perfect for a few little cat naps, interspersed with glimpses of the remarkably different landscape, varying from miles and miles of dusty nothing to, well, more miles and miles of dusty nothing. Oh yeah, and a few strange rock formations and other oddities.

We arrived to our quaint little hostel at around 3.30pm, and had a pick up arrange for 4.00pm for a tour of the Moon Valley. It was enough time for us to take a quick walk down the pedestrian-only, dirt “main street” of the town, quickly eat a huge empanada, buy some water, and get accosted by every breathing tourist operator.

We were soon back at our hostel to meet our bus, and were loaded on board and set off around town to pick up all the other hapless tourists. We were then taken to the Moon Valley, which was along the road that we had arrived on.

Our first stop was some huge sand dunes, with different colours and textures, and formations that made it difficult to judge size and distance. We climbed to the top of a large dune, providing an interesting viewpoint from where to take photos, as our guide explained several things to us about silica etc etc, that went in one ear and out the other.

After this stop, we were loaded back into the bus and set off to see the three Maria’s, rock formations that reportedly look like three different Virgin Marys. Sorry, but he lost me there.

We then moved off to some other, “hop-off-the-bus, take-a-photo-of-that, hop-back-on-the-bus” locations including some salt encrusted hills that looked like snow and some other sand encrusted terrain, before the piece de resistance -sunset overlooking the Moon Valley.

It was actually a very pretty vantage point to get a look over the valley and enjoy the wider landscape. I think I would have preferred it if we had come straight here after the dunes. We were even greeted by some local wildlife, a dessert fox that really looked like she couldn’t get away from us soon enough.

Several other tourists had taken position to wait for the sunset, some with groups that had BBQ’s warming up for dinner. Now that would be a nice thing to do! We took our photos, and tried not to get TOO close to the edge, as we enjoyed the changing colours of the landscape as the sun started to set. Sure enough, lots of other tourist buses arrived, some even asking us to move as we were in their “usual” place for their group photos, so the serenity was somewhat diminished. The sunset itself was nothing spectacular, but certainly the colourful view was lovely.

We were punctually loaded back onto the bus for our journey back into town, and the end of our first tour. We decided to wander back into the main part of town and see what was on offer for the next day, which we had deliberately left free until we arrived. After scouring the offerings, which differed from one another very little, we decided that really the only thing we wanted to do was go to the Puritana springs if we could get there in the morning, which we were told was better and less crowded. Unfortunately, any tour running to the springs was only running in the afternoon (and they wonder why it’s more crowded?), and a taxi was going to cost a fortune. We had very quickly decided that we were NOT getting up at 4am in the morning for the geyser tour, especially since it involved hours of winding and ascending bus travel, and all recommendations were NOT to drink alcohol or eat red meat the night before. I planned to do both! We rationalised that we had both seen geysers before, me in Bolivia and Gio in New Zealand, so we ended up deciding on a tour-free relaxing day around San Pedro itself, and to give ourselves a break from the tour bus.  With that task behind us, we set off to find dinner.

This was another opportunity to be accosted by vendors, this time, offering their special menus for the night. By the end of the street, we allowed ourselves to be charmed by a delightful girl, Paz, who offered us a welcome Pisco Sour that we found hard to refuse. The restaurant was off the main drag (which is funny, as all the streets are dirt, and there’s nothing that would be considered a main drag), and had a roaring open fireplace that we appreciated now that the desert sun had set and the cold had crept in.

After our delicious Pisco Sour, we enjoyed a delicious three-course meal, with a reasonably priced bottle of carmenere, and finished with an infusion of a local herb, ruda, which made a delicious, digestive tea.

We walked the short distance back to our hostel and crashed, glad we had made the decision NOT to get up at some ridiculous hour for the tour.

We took our time the next morning. After all, that’s what holidays are for, and got up just in time to make it to our complimentary hostel breakfast consisting of nuclear-pink, over-sweetened yoghurt, some chemical-chocolate cereal, bread with cheese, and nescafe. I was thankful I had brought the recently-delivered vegemite with me!

After breakfast, we freshened up and took a walk through the rest of the charming little town, discovering local artisan markets and stopping for the closest thing we could find to a real coffee. After talking to the Tourist Information centre, we decided to try our luck with one of the Spa Hotels, and set off for a walk out of town, along long dusty roads, until we arrived a Kunza. 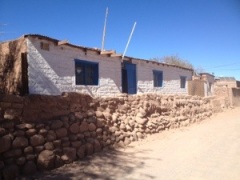 After passing through the security gates and navigating our way to the Spa Centre, we were in luck. We could use the range of pools for an hour and a half before we were both booked in for a one-hour massage treatment. Lovely!

Although it was in the high-20s and the sun was quite strong, only two of the pools were really warm enough to sit in, but we relaxed and enjoyed the water jets for a while before retiring beside the pool for a pre-massage lunch. Gio enjoyed a delicious roast beef sandwich, and I had a refreshing duet of gazpachos.

It was soon time for our treatments, and we were shown to our respective rooms, appropriately adorned with dim candlelight, soothing music and relaxing aromas. I tried to stay on the right side of consciousness to really enjoy my massage but the food, sun and water, and the massage itself, made it difficult. We both floated out of our treatment, got back into our street clothes, and managed to even secure a free shuttle transfer back into town. An experience more expensive than many tours, but better suited to our immediate needs and well worth every penny.

Needless to say, a well-earned (?) afternoon nap was in order before we took on anything too strenuous such as, well, finding dinner. We again found a nice, reasonably priced menu, this time in a little place on a corner in the middle of the main street, and again in front of a roaring fire. We enjoyed another Pisco Sour, and shared a bottle of Carmenere. We’re anything but predictable!

The next morning, we were up a little earlier to have our breakfast and get ready for our checkout and our tour pick-up. This time, we were going to the Lagunas Altiplanicas, or the High Plain Lakes. 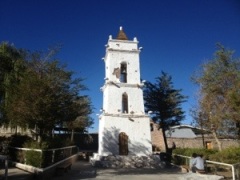 It involved a lot more driving that our first tour and, after picking up the rest of our guests, our first stop was actually not too far away in a small colonial town. Here, we were shown the town plaza, the colonial church with pagan symbolism, and a house with on-site llamas used for wool for the handicrafts.

We were then shepherded back onto the bus and taken to our next stop, some rocky salt plains with resident flamingos, which were very pretty, reflecting in the lakes against stunning backgrounds. 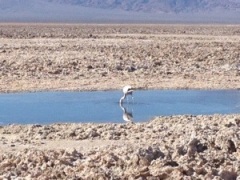 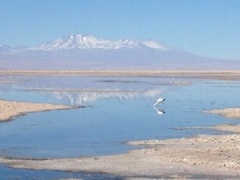 The next part of the drive was much longer, as we slowly ascended to over 4,000m, an altitude that got the better of one of our passengers, and the sun beating through the windows was sleep-inducing. After much winding and climbing, we eventually arrived at our destination, and it was well worth it. Snow-capped volcanos reflecting in the mirror surfaces of the lakes. Beautiful! 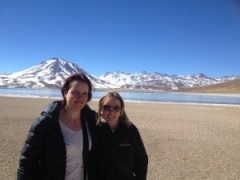 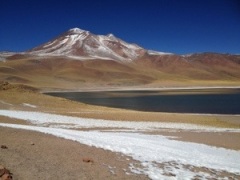 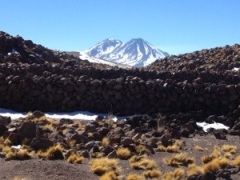 We spent quite some time admiring the lakes, and sighted a few small packs of vicuñas (a smaller member of the llama family) playing along the distant shore. It was very pretty.

We then set off on our descent, and eventually stopped at a small, blink-and-you’ll-miss-it town for a VERY late lunch. Everyone was starving, and quickly shovelled down our chicken consommé, beef and rice, and jelly for dessert, before being shuffled back into the bus.

There was no reason to fight any sleepiness now, as we made our way back to San Pedro, stopping only briefly to for some “hop-off-the-bus, take-a-photo-of-that, hop-back-on-the-bus” locations, one being the Tropic of Capricorn. 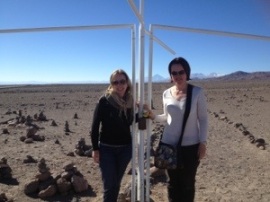 We got back with only a short amount of time to spare before our shuttle arrived to take us to the airport. Not even enough time for a Pisco Sour! That would have to wait for the airport, which was still a two-hour drive away. The sun was setting as we made the drive, which gave us a last opportunity to see some of the different landscapes, and we had a great night-lights view of Calama as we approached the city.

A lot of people go to San Pedro for a lot longer than we did but, for me, it was enough time. Unless you want to do every tour there is, there is not a lot else to do, and I was glad we had spent some of the time just “chilling”. It is a hard place to get around without doing the tours, which are all very similar and, well, pretty touristy. I’m sure there are more customised, personalised tours, and I’m sure they come with the price tag. I’m glad we saw what we saw, and I don’t feel like I missed out on anything, particularly since I’ve seen some amazing scenery in Bolivia and, let’s face it, we have some pretty incredible desert in Australia. Still, it was nice to enjoy a break in the warmth of the desert for a few days.