Valparaiso is Chile’s biggest port city and, before the Panama Canal, was thriving.  Now, it’s still an active, if less-busy, port, but the city now thrives on tourism.

The lower part of Valpo is built on reclaimed land from the sea, and the surrounding steep hills are filled with colourful, tightly packed houses – all different colours because they were apparently originally painted with whatever leftover paint was available after the ships had been painted.

Another unique characteristic of Valpo is the “elevators” that carry people up the hills, for about $200 pesos (40 cents).  Many of the elevators are currently under repair, but a few of the main ones still operate.

I visited Valpo for the first time when I was here five years ago, stayed a couple of nights, ran around and saw the major “tourist attractions” (including one of Pablo Neruda’s houses), got debilitating food poisoning from something and, when I was able to, went back to Santiago.

No wonder that, when I got back to Santiago last year, I wasn’t really in a hurry to go back to Valpo.  I went to the beautiful Casablanca Valley (which is on the way) a number of times, but never bothered to go any further than that.

My next trip to Valpo eventually came about after living in Santiago for 7 months, when some friends were visiting from Argentina and we took a day trip on the bus.  I went again shortly afterwards when a bestie visited from Australia, and we spent a day in Casablanca before continuing on for an overnight stay in Viña del Mar, and an exploration of Viña and Valpo the following day. 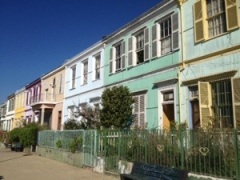 Each time I go, I discover a little more about Valpo and love it a little more.  Sure, at ground level, it’s still a port city – grungy and dirty and at times, a little shifty.  But there is beautiful architecture and interesting life and, hit the hills and (as touristy as they are), they are an open-air gallery of beautiful street art and lovely hidden art galleries that you can explore for hours.

There are also great restaurants and, in a case of third-time-lucky, I finally got to “Pasta e Vino” with some visiting Aussie friends, and have been back twice since!

It’s quickly become probably my favourite restaurant in Chile and, yes, I’ve been known to take a Sunday trip to Valpo just to have lunch there after fantasizing about their corn gnocchi with carne mechada.  Yum!

If you have a car, great, but it’s a cheap and short 1.5 to 2 hour bus trip from Santiago, and you don’t have to worry if you have a couple of wines at lunch.

So, now, I’ve come to think of Valpo less as a place that you go to show visitors around, and more as a nice day trip from Santi to get out-of-town on the weekend, eat well, and spend some quiet time exploring the meandering and colourful side streets and their resident galleries.  It’s almost like the Melbourne equivalent of Daylesford, without the spas.

Valpo, you have definitely become one of the things I love about living in Chile.