OK, so nobody really actually “loves” the metro, but when I compare it to my experience in Australia, the metro here is great.  Those of you that come from more civilised locations than Melbourne, like New York, London or Baghdad, probably think the metro here is pretty crap, but here are some of the things I like about the Santiago metro.

Nobody ever runs for the train in Santiago.  Why?  Because there will be another train in a few minutes.  Yes, really, there actually will be.  Not like in Melbourne, where I live 7 kilometres from the centre of town and, if I don’t run for the train, then I have to wait for 8 minutes.  In peak hour.  Providing the next one is not cancelled.  Or delayed.  Both of which are frequent occurrences.  And, if it’s a weekend, I would have to wait 20 minutes for the next train!  You would think I lived in a country town.  Planes from Melbourne to Sydney depart more often!

Another thing, the metro here is remarkably clean.  One Australian friend once took a disbelieving look at the tracks and asked “What?  Do they vacuum it?”.  I used to keep myself entertained while waiting for a train in Paris or New York by looking for the rats, secretly hoping that I didn’t spot something more sinister.  Don’t even talk about the metro in Buenos Aires, where you sometimes have to hold your breath for stations at a time due to the terrible smells.  Yep, the metro here is clean. 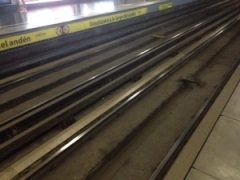 Also, in Santiago, if you want to find out how to get somewhere, like most of the world, you might put the address into Google Maps.  Then, you can ask for directions.  Guess what?  You can use the “Transport” option in the directions function, and it’s linked to the timetables and routes of BOTH the buses and the trains in Santiago!  How far off that are we Melbourne?

Actually, I am probably being a little unfair, comparing Santiago’s metro with Melbourne’s trains since, in Melbourne, our trains still run above ground.  Yes, that’s right, with dangerous boom-gate crossings or, if you’re lucky, a bridge, but with major interruptions to traffic.  Not to mention the land space that they take up that could otherwise be used for green space, bike paths, further development or, yes, even more direct roads.  We do have some “metro” trains, if you count the four underground stations that form part of the city loop.  Sydney, our largest city, is no better in this regard.

Furthermore, Santiago is continually expanding its metro network, with two new lines planned, with opening scheduled for 2016 and 2107 respectively.  I can’t help that feel that Australia, as a supposedly “developed” country, is getting left behind the rest of the world in public transport terms.

Sure, the Santiago metro has its problems, and we all have a complaint story to tell.  Sometimes you stop between stations in 40 degree heat, with only an indecipherable message to explain why, while you wait for train traffic to clear.  Sometimes trains are cancelled, or delays occur, for reasons ranging from suicides, to broken down trains, to God-only-knows-what.  At peak hours, the trains can be sardine-can packed, but it’s usually for an hour at most at each end of the day.  While some of the more modern trains now have air-conditioning, there a still a lot of trains with no air and the heat can be unbearable, both in summer and winter.  People complain about the cost but, at 620 pesos for a peak hour journey (roughly $1.20), I don’t think it’s too bad.

The reasons I can add the Santiago metro to my list of things I love in Chile is that it provides pretty good coverage of the city, with good connections to buses where required; it’s cheap; it’s relatively reliable; and it’s clean.  You can even use the metro to get to at least three wineries that I can think of!  What’s not to love?

(The buses, on the other hand, well, they’re a different story!)