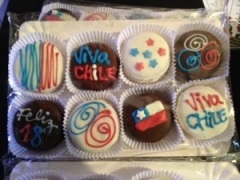 “Dieciocho” for short but, for many of us, probably 18th September is much easier!  The time of year when Chile celebrates their patriotic holidays and Chileans are at their proudest.

What should be two public holidays, somehow becomes three if it leaves one day between the official holidays and a weekend (most of the time) and, in turn, unofficially becomes a week of holidays.

People are either partying, or they leave town, leaving Santiago with a dramatically reduced amount of traffic.  Many stores are closed, and it pays to stock up on supplies beforehand, making the stores as busy as the day before Christmas or New Year’s Eve.

And the parties, well, they’re big.  Referred to as “fondas”, they are held all over town in public parks.  These days, there’s a queue and a fee to get in to most, and you pay an awful lot for food and drink once you’re in there. It certainly doesn’t seem to detract from people having a great time; dancing “cueca” (the national folk dance), watching live entertainment, eating traditional food, and drinking chicha or terremotos (“earthquakes”, a cocktail made with pineapple gelato and “pipeña”, young, bulk wine). 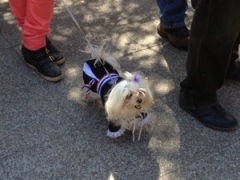 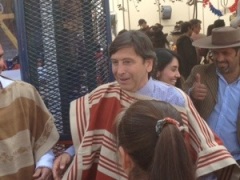 Everybody is out for a good time, and many people dress in traditional costume – the old, the young, pets and, yes, even (ex) politicians aren’t opposed to throwing on a poncho!  (In fact, given the timing at the end of the presidential campaign, they probably lead the charge.)

September is a windy month, and it’s a traditional time to fly kites. Although there’s been an influx on the market of cheap Chinese-made kites, you can still see a lot of artisan kite makers, and the streets are often lined with their colorful stalls.

It’s the biggest event of the year and, if they’re not celebrating in public, they’re celebrating with family, or just getting the hell out-of-town for a nice break after a chilly winter.

It’s a nice time to be in Chile, to share in the festivities and witness the burst of Chilean patriotism. Yes, definitely one of the things I love about living in Chile.

PS.  Hmmm, one more post to go in my challenge!  I wonder what it will be.  There are lots of other little things I love … the sunny days, the cool nights, the lack of creepy crawlies (every Australian knows what I’m talking about here!), the historic town square, particular restaurants, the first half an hour after you clean your floor (the rest of the time, not so much!), the opportunity to speak another language … oh, what will it be?  I guess you’ll have to tune in to find out!  See you tomorrow.