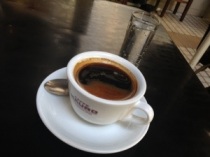 On my first Monday in Santiago, I decided to wander into town to find a real coffee. This requires a lot more work than you might think.  They may grow some of the world’s best coffee in South America, but it is still a rarity to find a well made cup. There are still many cafés here that bring a jar of nescafé to the table and hot water, and still many locals that prefer it that way, so I think it will take at least a generation to change it. Thankfully, I’d done my research and found a great website, Revolver, that recommended a cafe in town with a real barista and a good coffee, and they weren’t wrong.

After my caffeine fix, I found myself walking around town and I realised there was a free city walking tour about to start, so I decided to join it. Our guide was enthusiastic and animated and, in addition to showing us the main historical sites, provided us with an interesting insight into life in Santiago, his thoughts on the military dictatorship under Pinochet, the treatment of the Mapuche (indigenous), and the current political situation. The tour also stopped at a couple of venues to allow us to buy some local fare, such as mote con huesillo which is a really sweet, peach-flavoured drink made with mote, a barley-like grain. We also had a rest stop to relax over none other than the famous pisco sour, before walking through Parque Forestal and ending the tour in Bella Vista. 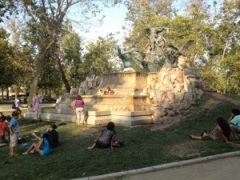 I met a couple of nice French girls on the tour, who came to my attention when one of them spoke English with a slight Aussie twang. Turns out that Elodie had spent a year travelling in Australia and picked up some of our expressions and intonations. Elodie’s parents were coming into town the following day and they were taking off to spend some time together, which left her travelling companion, Dorothee, on her own for two weeks. We decided we would do something together, and the first thing on the radar was to go and eat duck at a French restaurant she had heard about. She has been away from home for almost five months and was having withdrawal symptoms, and I hadn’t had duck since arriving in south America and was easily convinced.

After our duck dinner, we decided to explore one of the local wineries together. There are many wineries close to Santiago, but some are difficult to get to without a car. Thankfully, there are a handful that can be reached with a combination of public transport and taxis, so we met at Estacion Central to make our way to Santa Rita. After a train trip to Buin, a bus ride to the gate of the winery, and a 20 minute walk from the front gate, we arrived hungry and ready to eat lunch before we took the tour.

The food was nice, but not remarkable, unlike the beautiful verandah setting outside the restaurant where we sat to finish our glass of wine, overlooking the garden. The tour was interesting, and we saw the cellars where the previous owner, Doña Paula, had once harboured 120 Chilean soldiers during the civil war, including the now famous General Bernardo O’Higgins, who went on to be one of the great heroes of the war. 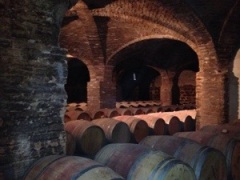 Our next catch up was a few days later at a wine restaurant I had heard about, Bocanariz (mouth nose). This is one of the few restaurants in town with a large selection of wine by the glass (38 apparently) and, in addition, has about ten different wine flights, presenting three different “tastes” of wine for roughly the equivalent cost of a glass. I love this concept as it allows you to taste a wider variety of wines. Each wine comes with a little paper disc containing the details of the wine and, if you really love one, you can order it by the glass, buy a bottle from their cellar to take home, or simply take the disc home so that you remember the wine in future. 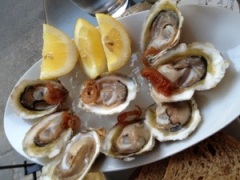 The menu consists of a range of small plates that can either be shared, or eaten in a traditional entrée/main formation, and all of the staff are trained sommeliers and will happily help you pair the wine and the food. This place quickly became my favourite restaurant, and I have been back a few times since, each time taking someone new with me to experience it. 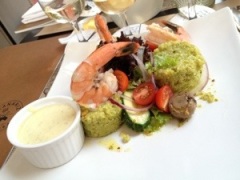 The following Sunday, I had a horse ride in the Andes that I had booked before I even left Buenos Aires, through the same expat group that I had joined there. We met our guide, Jeimy, at a car park at the end of the metro line in Los Dominicos, and were transported to the ranch in a mini-bus, about another half an hour away. We quickly introduced ourselves and the bus trip was a great opportunity to get to know each other, a group of people from different parts of the world – Chile, Portugal, Peru, Columbia, USA, and, of course, Australia.

Our horses were quickly made ready for us, and I was given the beautiful Gitana, or Gypsy. The saddlery was pure gaucho, with saddles as big as sofas and huge closed-toe stirrups. We had a beautiful ride, winding uphill and through bush for a while, before descending for a little river crossing and then climbing some more. At first, the bush was not too different to some of the Australian countryside but, as we went further on, the cacti became more numerous and the mountains more distinctly Andean. In the heat of the day, it was a great way to see the land without having to hike it ourselves. The horses are so well-trained and accustomed to the terrain. We even had a foal accompany his mum on the ride. We had a mixed group of riders so we mostly walked but, towards the end of the ride, a couple of us managed to get a couple of little runs in on the way home, a weird feeling in the big saddle! 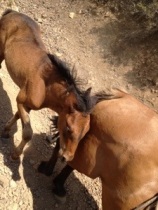 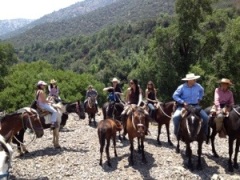 Our reward at the end of the three-hour ride – a traditional Chilean asado (BBQ), with refreshing drinks on arrival, and beer and wine with lunch. 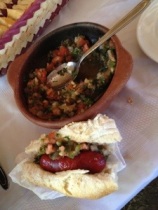 We started with choripan (chorizo in bread) and empanadas baked in a little oven attached to the charcoal grill. There was a popular Chilean salsa called pebre, and a spice mix called merquén. We then had delicious steak and ribs and fresh salads, followed by fresh fruit for dessert and a kind of millefuelle cake made with the Chilean equivalent of dulce de leche, manjar. It was overall a fabulous day out, but the best part was definitely the people. We all seemed to gel together very well and, by the time the bus dropped as back at the train station, we were making plans to get the group together again soon.