Santiago possesses a large variety of interesting and beautiful architecture, as indeed, do other parts of Chile and South America. Big and beautiful, European influenced buildings that are a rarity in Australia.

In fact, there’s so many examples of beautiful old homes and buildings in Santiago, that many are left in ruin, from either earthquake damage or just old age and neglect, with owners who can’t afford their upkeep, let alone their restoration.

Many are fenced off for the safety of the general public, lest some homeless person taking shelter should be injured by collapsing walls or ceilings.

Barrios Yungay and Brazil, and the little sub-barrio of Concha y Toro, house some of the best examples of these aging beauties that have seen their hey-day and, like yesteryear’s Hollywood starlets, are now in decline.

Others have been restored and maintained, often converted into boutique hotels or businesses. It would be a dream to own one of these beauties and restore it to its former glory, but it would take a LOT of money, patience and dedication.

The historic downtown areas of Lastarria and Parque Forestal, and Bella Vista and its surrounds, provide many examples of the extremes between the renovated and the derelict. 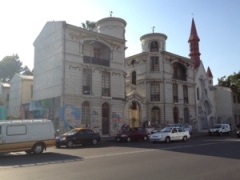 And it’s not just the inner city. You’ll find many fine examples in other neighbourhoods including, but not limited to, parts of Providencia and Ñuñoa. 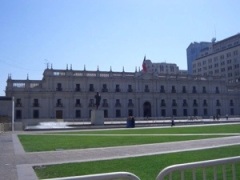 In addition to old dwellings, Santiago has many beautiful commercial and public buildings (including churches, of course!), such as Estación Mapocho, Museo de Bellas Artes, “La Moneda” governmental palace, and many, many others.

It’s a pity that modern design and architecture is so often focused on speed-to-market and cost, and not on form and beauty.

These old gems make it a joy just to walk around and take in the impressive man-made beauty of the past. Another thing I love about living in Chile.

Do you have a favourite building in Santiago?