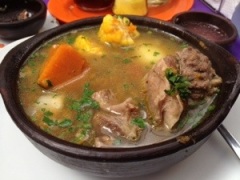 Since food is obviously one of my big loves, I really wanted to include at least one Chilean dish in the list of things I love about living in Chile.  Sure, there was the “cordero al palo“, which is an obvious choice, but as far as a “prepared” dish goes, I love a good “cazuela”.

It is a delicious and comforting broth, made with either beef or chicken, and containing large chunks of vegetables, usually potato, pumpkin, and corn.  It is fortified with rice, and finished off with some chopped coriander or parsley.

Besides the flavour, another thing I like is that you can see what you’re eating!  It is usually made with a cheaper cut of meat that’s cooked until tender, so it’s good to be able to see which pieces of the meat you want to put to the side.  Plus, it’s a complete meal, with a balanced serve of protein and vegetables, the latter of which is often lacking in Chilean dishes.

You can get a good, and very cheap, cazuela in pretty much any Chilean “picada” around town or, if you want to be sure to get good quality, Gabriela (under GAM) does a good cazuela for two.

OK, now I’m hungry.  Yes, a good cazuela is definitely something to love about living in Chile!