Following my excitement about attending the Polo Finals, I saw an event posted through the Expat group, InterNations, to visit an estancia and have a free polo lesson. The only cost involved was a contribution for the transport, and a small tip for the staff. Bargain! And … yikes!! As much as it sounded like fun, it also made me a little nervous. Would I be able to stay on the horse, AND hit that little ball with the big stick? Well, there was only one way to find out.

On the last Sunday of the year, we met at Marion’s place to make our way to the estancia. Marion is a tango teacher who runs a hotel geared at people who want to learn tango and, on the side, she’s been learning to play polo and is the connection to the polo club. She came across it by chance one day while out visiting her in-laws at their “country” – a rural property in an enclosed and secured neighbourhood. She saw the signs for the polo club and decided to check it out. Just happened that they were playing at the time, she watched for a while, and has been hooked ever since. She now has her own horse which she keeps at the club.

Four of us jumped into Marion’s car and it took about half an hour to make the short drive out of town to the west of BA. Being the period between Christmas and New Year, the roads were very quiet, which is completely out of the ordinary.

When we arrived, there were a couple of people saddled up and having a run. They looked pretty comfortable, but I wouldn’t go so far as to say they make it look easy. Not for me anyway.

It was a beautiful setting, very casual, with a nice green field with some big old gum trees along the near side and a small covered seating area to watch the action. Marion had just bought some brand new, custom-made riding boots (told you she was hooked) and, having the same size foot as me, was kind enough to give me her other pair of boots to ride in. I was then fitted up with chaps and a helmet, and felt ready to go.

It wasn’t long before more horses were ready and they gave me Marion’s horse. Fidel, the polo instructor, appropriately “instructed” me – go on, take her for a run around the field. Oh, OK, just like that. She had a beautiful smooth canter and, after a couple of spins, Fidel approached me with a whip and a mallet, gave me some pointers on holding them all polo-style, and sent me off to chase the not-so-little white ball.

It was hilarious at first, and that poor horse was the most patient animal I’ve ever come across. Initially, I missed the ball a LOT, and laughed a lot but, after listening and applying the tips from Fidel and other more experienced players, I was getting the swing of it (pardon the pun). Every now and then, I hit it far enough to try to get my horse into a run in between, but she knew better for such small distances and we walked in between shots. I relentlessly chased that ball up and down the pitch, making sure to hit it between the goal posts at each end and gloriously raise my arm and shout “Gol!” before turning around and taking it back to the other end. Eventually, I was hitting the ball a little further, enough to at least get into a trot between shots. I was thankful for the helmet, not for fear of falling off, but I’m sure it prevented me from hitting myself in the head with the mallet a few times!

Once the sun started to get too much for me, and I noticed that all the other players were heading off the field, I reluctantly decided to call it a day. 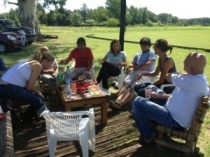 After the horses were unsaddled, unbraided and sent off to graze, all of which happened like clockwork from years of experience of the handlers, Fidel brought out some “picadas”, plates of cold cuts and cheese, and we brought out our picnic goodies that we’d brought along, and enjoyed a relaxing time in the shade of the shelter.

There was talk of a mid-week polo game on the next coming Wednesday and Marion was hoping that, being holidays and a lot of more experienced players being away, she might get a game. In the car on the way home, she asked me if I’d like to go, and I jumped at the chance.

So, once again, I turned up at Marion’s place to head out to the game, but this time, wasn’t really prepared to play as I thought I’d just be watching. Apparently not! Marion told me there would be time before the game to have a run, and so she equipped me with some socks and again offered to lend me her boots so that I could have a ride. 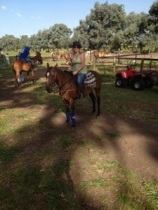 I got quite a decent run the second time, first of all a nice canter round and round the field on a different horse, and then with the ball and mallet. I could notice improvement over last time already, and with a bit more instruction and practice, could hit the ball further, hit the ball on the trot, get into a canter between shots but, for the life of me, couldn’t manage to make contact with the ball from a canter. Still, I was encouraged by the more experienced players and told I was making good progress.

A number of other players and horses had turned up while I’d been practising and they formed two teams, and started the game. I watched the first chukka from the shelter and then, between chukkas, I was handed Marion’s horse to ride for a bit. Once the second chukka was about to start, Fidel told me to stay on the horse and ride around the boundaries, watching the game from the horse. We had another good run around the outside of the field and followed the action. It was great to see them play, especially to see how well the girls played, and it gave me something to aspire to. Fidel had bought a little pony during the week, and he even gave it a bit of a run, even though his feet nearly touched the ground! I had an absolute ball, and I can see why this exhilarating game can become addictive.

When the game was over, the horses were once again efficiently undressed and sent off to graze, some put in floats to go back with their owners, and we all sat down to have a refreshing cold beer. It was dark as we were travelling back into BA, and I was so glad I’d been able to get another chance to get close to these beautiful animals and to this game before I left BA. What an amazing experience, and not something I’d ever thought I’d be doing on this trip! 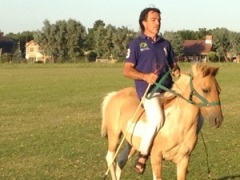 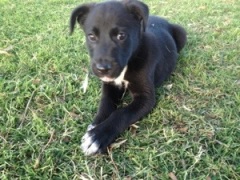