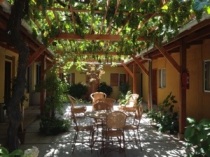 Valle de Colchagua lies about 3 hours south of Santiago, on the famous Ruta de Vino (wine trail). It hit my radar early on due to many recommendations and some great reds that I’d tasted that are coming out of this region. Early in February, I decided to take a few days out and explore the Valley.  A friendly neighbour from my apartment complex was travelling south, so I took advantage of a lift as far as San Fernando, then jumped on a bus to Santa Cruz, where I had booked a hostal for two nights.

My hostal was close to town, very basic, but clean and with a lovely courtyard, and a free breakfast. Arriving mid-afternoon, I checked in, and immediately booked a wine tour at nearby Viu Manent, arranging for a taxi to pick me up, wait at the winery, and bring me back after the tour. 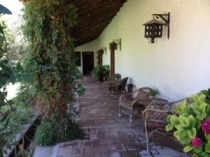 Viu Manent is an historic winery set in beautiful Spanish ranch style buildings, some of which were damaged by the 2010 earthquake, and others which remained largely untouched and are beautifully retained and used today. I was given a one-on-one tour of the gallery, courtyard and events area, before being led across the grounds to see the restaurant and equestrian fields, and then boarding our very special form of transport for the rest of the tour, a horse-drawn carriage. 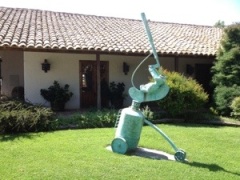 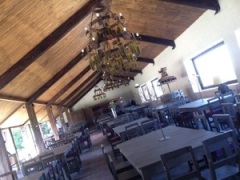 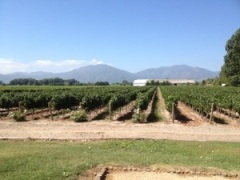 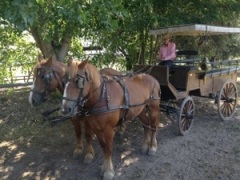 Viu Manent has a big focus on horses, with their own equestrian club, providing horseriding and lessons, and regularly holding equestrian events and polo games. Two gorgeous chestnuts of their stable calmly pulled the carriage through the fields of vines whilst the guide explained the grapes, then delivered us to the production area. Here, I was handed a glass and had the opportunity to taste a Malbec directly from the stainless steel vats, experiencing the fruit pre-alcohol and pre-oak. The tour also gave us a view of the oenologists, both female, working away in their lab. 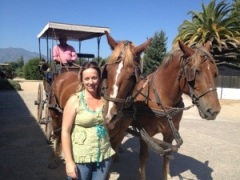 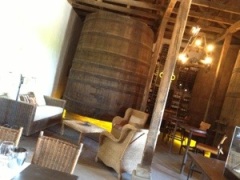 Our trusty steeds then delivered us back to the main building, where I was taken into a beautifully appointed room for the tasting of five different wines, starting with a creamy 2011 Chardonnay with a toasty oak nose. Viu Manent has a range of wine called “Secreto”, where the main grape, being 85% of the blend, is listed on the bottle and the remaining 15% is a “secret”. Our next tastings were of the 2011 Secreto Pinot, which was light and full of plums and roses (as opposed to Guns n Roses!) on the nose, and the 2011 Secreto Carmenere, ruby in colour with a smoky nose and peppers and paprika in the mouth. A very smooth wine that had reportedly been award 90 points by wine magazine, Descorchado.

Next up was the 2011 San Carlos single vineyard Malbec, a purple velvet colour, with plum and red fruit notes followed by an acid finish. It was interesting to compare this wine with the wine we’d tasted from the vat, and be reminded of the original fruit notes, whilst noting the influence of its 16 months in oak and the fermentation process. This wine is still young and, with cellaring potential of up to 15 years, would certainly benefit from some more time in the bottle.

The final wine was the 2011 Viu Manent Gran Reserva Cabernet Savignon. Made from the best grapes selected across the vineyards, 80% of the wine has been treated to 12 months in french oak to produce a spicy nose and a plum jam taste with notes of vanilla. Again, a young wine with plenty of potential for those with patience.

After the tasting, I found my driver patiently waiting to drive me back to the hostal. After freshening up, I decided to take a walk around town and find somewhere for dinner. I headed to a restaurant called Motemei, located on the grounds of a small vineyard. Unfortunately, the restaurant was closed, but I was able to look around the grounds and enjoy the changing light of the setting sun. I’ve since heard that the restaurant is relocating to Santiago in March so I will keep my eye out for them! 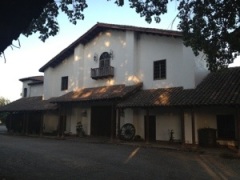 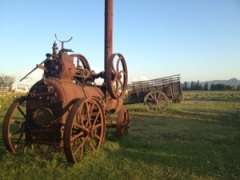 I ended up eating a nice but unremarkable meal at Los Varietales restaurant in the ornate Santa Cruz Plaza Hotel, preceded by a “Chardonnay sour”, a local speciality based on the famous Pisco sour. Give me the original any day! After dinner, I walked the short two blocks back to my hostal and settled in for a good night’s sleep ahead of my second day in the valley. 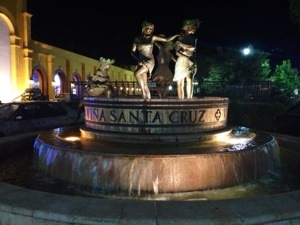